Looks like a function from the outside, but runs a dispatcher internally, allowing sensible diagrams to be drawn.

I am debugging this… [If you see my problem, please email me :-]

I draw my “code” using draw.io, then hand-transpile it to text[^txt] then use Ohm-JS to transpile the pseudo-code to JavaScript… 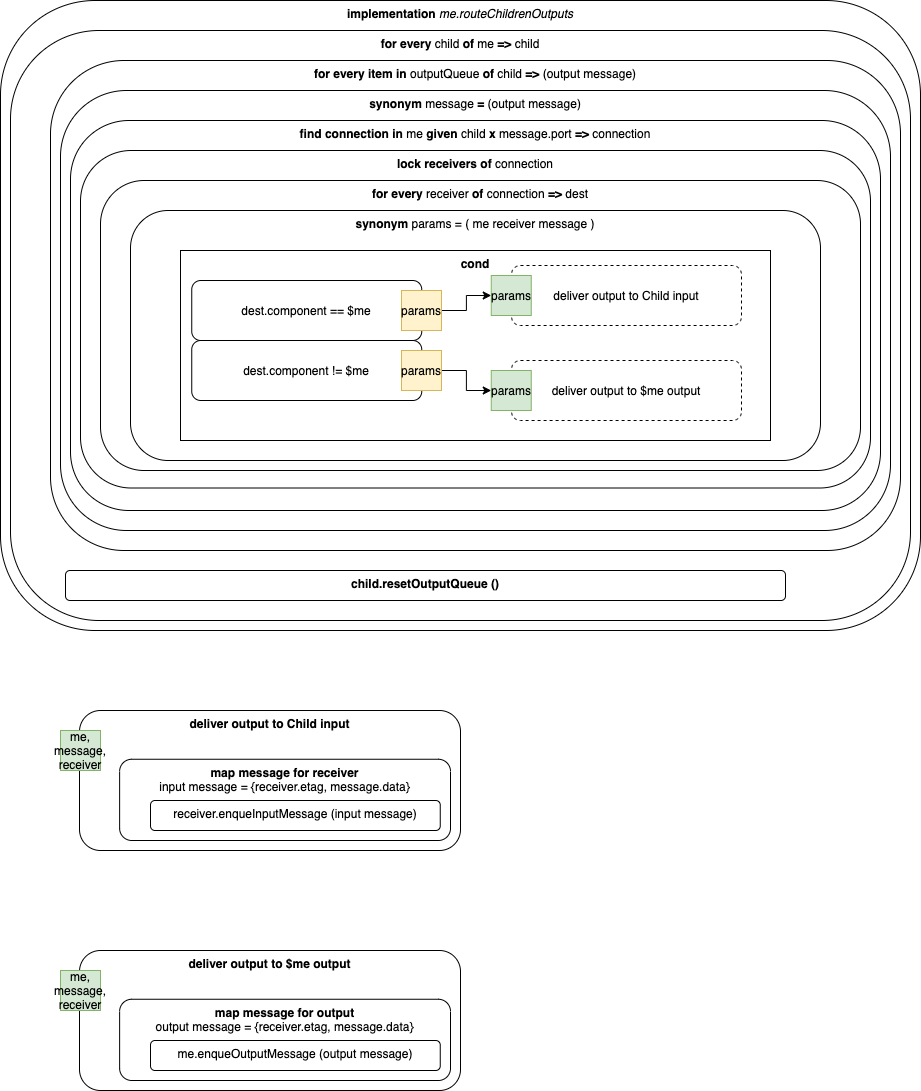 [Beware. This program is currently being debugged and the above may contain inconsistencies.]

Note that the do work () function might call a done () function that affects the termination test - the next time around.

Each Loop is made of 3 pieces

Mutability - bad in general, but, OK when restricted.

Note that the loop contains two (2) function calls. These can be written in a functional manner.

Bloatware, like Linux, MacOS, Windows, etc. tries to enable mutation in a paradigm (functional) that resists mutation. The result is bloatware. Note that the above Loop is understandable and cannot need 1Mb of bloatware to support it.

Most of our programming languages allow bloated concepts like synchronization-everywhere, and, mutation, and, … I argue that we should lift these concepts out of the beautifully-simple paradigms, stop trying to force one language to do everything and use Ohm (a derivative of PEG) to wrap many syntaxes around the paradigms. Then, we can choose syntaxes to suit our problems instead of having the language-designers tell us how to solve our problems.

Creating syntax (a language) used to be hard.

With Ohm, syntax is no longer hard.

Languages are like bowls of candies, grab a handful.

The underlying paradigms are still “hard to understand”, but we can drape them in less-hard-to-understand syntaxes.

We can create a cookbook of various syntaxes for programmers who don’t want to create their own syntaxes.

Programming language IDEs were invented in the mid-1900s based on the pathetic hardware of the day. The hardware has improved, but we continue to use mid-1900s style languages.

The “difference” between traditional looping and concurrency is:

A “game” world would be a Concurrency Loop that steps until it has changed the world. It returns the modified World. The game Loop would store this modified World for use in the next go-around.

Makng all code concurrent makes it possible to optimize the code by splitting pieces onto other machines (distributed).

Splitting is possible using synchronous languages, but is more complicated (we invent bloatware like Linux, Window, MacOS, etc. to help with the splitting).

Splitting is “natural” on the internet. Synchrony inhibits splitting and, therefore, inhibits full realization of internetting. We end up with contortions like callbacks and CPS.

Once you have worked out the mechanisms for internal concurrency, it becomes “easy” to imagine other kinds of things, like internal state-tracking and Loop-ing…

One should be able to “compose” pure functions with concurrent lambdas with state-machine-lambdas with loop-lambdas.

As a working title for this concept, I’m going to use ė.

It is the Lithuanian letter “e” with a dot above it.

It is pronounced like Canadian “eh” or the English-language letter “A” (hard, not soft).

I almost chose another Greek letter, then realized that I could use any unicode character, then, almost chose a smily emoji, but, finally settled on ė.

[The choice is almost arbitrary, but, ė ties my two inherited cultures together.]

We need a toolbox that contains the Atoms of software. Something like:

Then, we can glue the Atoms together using any syntax we choose.

PEG allows us to break out of the syntax prison. (Including the use of multiple languages (e.g. using balanced paren-matching))

Ohm-JS is even better than PEG.

FP taught us that variable names are inconsequential (in fact, this can also be understood by building compilers).

In my view, syntax is equally inconsequential.

FP teaches that pattern-matching is King.

We only need Looping.

TCO is make-work activity - an attempt to kludge looping into the functional paradigm.

We need a way to compose looping with pure functions.

Sector Lisp is a wonderful example of a bloat-less functional paradigm.

Rhetorical Q: How do we compose Sector Lisp with Loop and State?

In my view, don’t jam them all together, snap them together in new ways for every specific problem.

Note that Looping doesn’t even make sense in a distributed computing environment.

A language for distributed computing does not have Loop (or Recursion) as a fundamental concept.

A Component can always Send messages to itself if it wants to repeat a computation.

Looping and Recursion imply the use of a Stack. This doesn’t make sense in a distributed environment.

A single CPU can have a single Shared Stack, but the idea of a Stack doesn’t translate well into something that is sent on a thin wire.

The concepts of Loop and Recursion and Stack are so in-grained in our thinking that we feel it necessary to (cleverly) invent epicycles, like preemption, to accomodate long-running Loops.

These epicycles have caused us unanticipated grief in the past, e.g. priority inversion in the Mars Rover disaster (see my blog).

Boxes / ellipses / blobs on a diagram look like isolated entities. And, that’s how humans interpret diagrams.

It is possible to draw diagrams of computer networks, because each computer on the network is isolated from the others (they synchronize only when they have to, otherwise, they run at their own speed (without implicit synchronization))).

It is possible to draw sensible diagrams of large chunks of software.

It is not possible to draw sensible diagrams of software at a fine grain, due to implicit synchronicity (for example, see my blog “CALL/RETURN Spaghetti”).

The mechanism for interal concurrency is ridiculously simple. Like the concurrency used in early computers

Preemption is a tell - a bad smell - that something is wrong / too-complicated.

In fact, preemption allows us to disobey the principle of locality-of-reference. Blocking is done in two disparate places:

The O/S does preemption by pulling the rug out from under an app.

The only reason that the O/S needs to do this is to allow for long-running Loops.

Preemption should be relegated to development systems.

Well-behaved apps (i.e. products) should not interfere with one another and, hence, don’t need preemption.

The only reason that product apps might mis-behave is that they are too complicated to understand (and tame).

The reason for this is bigotry.

Assembler and C programmers thought that Lisp and other dynamic languages weren’t “as good” as C and assembler, so, they built part-of-lisp in raw assembler and C, the hard way, in an act of self-flagellation.

I suggest that we put concurrency directly into first-class functions and closures and get rid of Operating Systems.

Concurrency Is Not Parallelism

Concurrency is a life-style.

Parallelism is a greasy hamburger.

Rob Pike Concurrency Is Not Parallelism

It is possible to write programs that are concurrent but not parallel.

It is not possible to write programs that are parallel without, first, being concurrent.

Concurrency is a paradigm.

Parallelism, though, is simply a problem-to-be-solved. An optimization.