Broadly, there are two extremes in programming language design:

What is the middle ground?

We need a version of The Humane Interface for programming language design.

The goal of programming is to control the operation of a machine.

A concrete example of (2) - theoretically sound, but, inhumane, programming language is the λ Calculus.

The following is reverse in λ Calculus1 :

(This becomes even harder to read when De Bruijn indexing is used).

Clearly, one wouldn’t expect spreadsheet users to use λ Calculus instead of the high-school math functions that they are used to.

So, what is the “science” behind wrapping theoretically-sound operations in sugar-coated syntax that makes for a “good” programming language?

Firstly, it depends on the problem space. Spreadsheet users want “simple to use” functions. They don’t want to see the power of λ Calculus or the power of Python.

One Language To Rule Them All - NOT

I argue that there can be no one programming language that will satisfy everone.

General purpose programming languages are dead to me.

The implication is that we need tools to help us build lots of programming languages, and, we need tricks to make the act of building languages proceed more quickly.

We need to explore / characterize what end-users think is simple.

Simplicity is defined as “lack of nuance”.

How can we hide/elide nuance without removing nuance?

We need to employ layered design.

Our programming languages are relegated to being text-only3.

People think in terms of containers - dolls nested within dolls.

Containment is easy to express on diagrams.

Containment is less-easy to express in text. We have spent decades crawling out of the hole created by our use of text-only languages (Structured Programming, Global-vs-scoped variables, OO, λ Calculus, namespaces, etc., etc.). 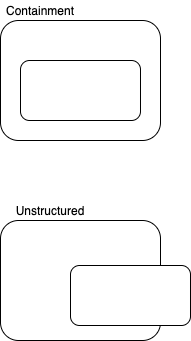 Note that if var x appears outside of the braces, the variable x is no longer contained.

It happens so often that we’ve given this condition a special name - global variable.