Concurrency Is Not Parallelism

Concurrency is a healthy lifestyle.

Parallelism is a greasy hamburger.

Concurrency is a paradigm.

Parallelism is an optimization.

Programs written in the concurrent paradigm need not be parallel.

Parallel programs must be concurrent.

Concurrent programs must have no dependencies on one another

In fact, that is how current-day compilers implement parameters.

All data is pushed onto the stack and sent to the callee as a single block.

The callee destructures the data on the port into separate parameters.

The caller destructures the return value into separate data slots.

F is a component with exactly one (1) input port and one (1) output port.

This notation does not allow for multiple (or zero) ports arriving / sent at different times.

Ports can fire (arrive, be sent) at different times. 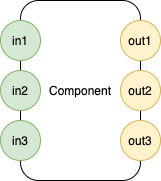 Blocking is thought to be the domain of operating systems, but blocking is also controlled by CALL/RETURN.

Preemption was invented as a way for the operating system to yank control away from functions.

Supporting Loop required the creation of the epicycle called preemption.

Truly concurrent, non-inter-dependent, software Components do not use Loop.

If a Component really, really wants to Loop, it can send itself a message.

Loop (recursion) is valid and usable on systems that share memory, e.g. single-CPU systems (extended to multi-core systems). One would not send a stack along a wire to another processor, hence, programming languages that have built-in Loop (and recursion) are not natural ways to describe distributed systems. The CALL/RETURN paradigm has a natural limitation that makes it hard to use in distributed situations2.

Synchronization is the exception not the rule.

Currently, PLs make synchronization the rule, not the exception.

This led to the creation of the epicycle3 called operating systems.

Most real problems do not require synchronization.

Synchronization is a function of time and history.

Removing time and history from a problem - a notation (model) describing a problem - is a useful approach, but has limits.

Such - time-removed - notation cannot describe time-based sequencing, except through the use of tricks and warps to the notation, e.g. clever, PhD-level, “complicated” epicycles.

In the cases where a problem needs to be sequenced in time, one builds a sequencer.

The problem of building a sequencer can lead to sub-problems, like

This problem is being attacked with research on distributed systems, p2p, etc.

In my opinion, the solution lies in considering the system at a higher level.

Synchronization might be designed-in at a high level, not at the low level.

IOW: working with only low-level, pervasive synchronization keeps one too busy devising tricks and escapes instead of viewing the larger picture 4

Businesses are arranged in a top-down hierarchical manner.

Businesses appear to have a single point of failure - the CEO.

If the CEO of a business is changed, the business does not necessarily fail.

Ethernet is a solution to a problem which rarely needs synchronization.

Synchronization is so rare, that it is completely left out of consideration.

In the rare case that multiple Components collide and try to use the same resource at the same time (e.g. writing data onto a data bus), the Components do not synchronize - they simply back off for random amounts of time.

Obviously, this non-synchronization algorithm works. We use it daily.

Current, synchronous, programming languages do not serve this domain well.

HTML and JavaScript were invented to describe internet apps.

HTML and JavaScript are but low-level (assembly) languages for describing this domain.

Tunney’s Sector Lisp and BLC are examples of the beautiful simplicity of the functional paradigm.

Sector Lisp started out as a project whose goal was smallness (in bytes, in size) of executable, but, involved preening the basic paradigm and removing cruft.

When we corrupt this simple paradigm, the result is bloatware.

The functional paradigm is a useful paradigm for describing a subset of what electronic computers can do, but it behooves one to understand the limitations of this paradigm.

Tells that the functional paradigm is being stretched beyond its natural limits:

A Loop consisted of a simple branch+label.

Mbytes of O/S bloatware was not needed to implement Loop.

Scanning hardware devices, like joysticks, did not need Mbytes of O/S bloatware.

Programmers can try to push mutation aside, but, this results in bloatware.

Functional parts of a program should be implemented in the functional domain.

Non-functional parts of a program, like mutation, should be implemented in some other domain.

Programmers need a way to plumb notations together to produce systems, not a way to express everything in only a single notation.

Electronics engineers figured this out.

Instead of Operating Systems calling functions, functions might have concurrency inside them.

[I’m currently working on presenting this concept. I call it ė.]

Table of Contents as of Dec. 1, 2021
Blog
Videos
References
Books